6 Sneaky Areas in a Home Where Mould May Hide 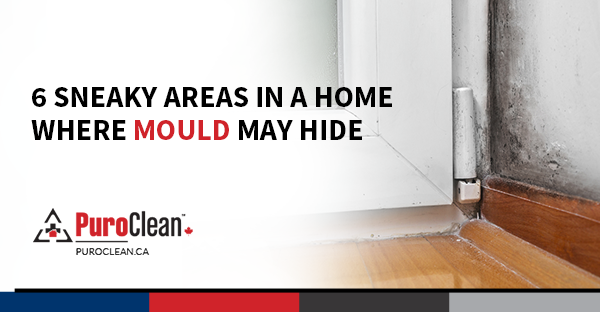 Even though mould most commonly grows in the bathroom and basement, it can also occur in various sneaky areas in a home. If mould is present in a home or property, it is important to remove it immediately to minimize health risks, to prevent structural damage and other reasons. Below are six unexpected areas in a home where mould can hide:

1. Refrigerator Drip Pans – The drip pan under the fridge collects moisture, dirt and bacteria, making it a perfect place for mould to grow. Cleaning a drip pan involves spraying a mixture of 1 teaspoon hydrogen peroxide in 1 cup water over the pan. A rag soaked in vinegar can be used to wipe the pan. To prevent mould from growing in the drip pans, they should be kept clean and dry.

3. Air Conditioning Units – AC units collect dust, pollen and moisture from the air, which may allow mould to grow on the AC drain pans, coils and ducts. The best way to get rid of the mould in an AC unit is hiring a professional restoration company that deals with mould removal. They can detect and remove mould from the AC unit using specialized equipment and techniques. More information about air duct cleaning is available here.

4. Window Sashes and Seals – Windows are common areas where condensation forms and dirt gathers. This combination results in mould growth if the moisture and dirt are not removed. The mould can be scrubbed off with a toothbrush and a mixture of half vinegar, half water. To prevent condensation, the seals and sashes may have to be repaired or replaced.

5. Dishes – Mould may grow on wet dishes that have been stacked and haven’t been used for several days. To wipe out the mould from dishes, they should be washed in a dishwasher set on a hot cycle. Before storing the dishes, it’s best to wipe the cabinets with a rag soaked in vinegar.

6. Inside Chimneys – Rain water and snow may enter the chimney if its caps are rusted or the flashing is damaged. Mould can grow inside chimneys due to the water, dirt and other organic debris that collects in brick crevices. Before removing the mould, the caps and flashing should be fixed or repaired. To remove mould, it’s best to hire a chimney sweep that can give it a thorough cleaning. Hiring a chimney sweep to clean a chimney once a year is essential to preventing mould in the chimney.

The best way to keep a home mould-free is to prevent it from occurring. Mould prevention tips can be found in this article. General tips to clean small areas infested with mould in a home are available here. The PuroClean team stands ready to provide professional restoration services to any property affected by fire, water or mould damage.